Principle 5: Rather than a supreme being, we recognize and honor the divine energy that exists in all living things.

As I write this, I am sitting outside on my patio on a rather warm Florida day in early June, and while the scenery is not the most beautiful I’ve ever seen in my life, it is nonetheless pretty. There are shrubs and trees and palms all around, but the most striking thing of all is the sheer amount of activity: butterflies flitting about and pollinating flowers, birds flying from tree to tree or soaring in the breeze high above, an occasional rabbit or squirrel scurries by in search of food, and each one is busy with its own activity and fulfilling its own purpose. The sounds are prolific as well; the sound of the wind, the chatter of numerous varieties of birds all singing their distinctive melodies, crickets and other insects sounding their calls, and thunder in the distance signaling the approach of an afternoon spring shower.

As I sit here, I am struck by the peacefulness, the serenity, and the harmony that exists in nature. But I am also struck by the sheer energy of the activity. Everything from the plants and trees to each of the various animals or insects to the blowing breeze to the blanketing sunshine to the warm temperature has energy. And so do we. Everything, whether animate or inanimate, is made of energy. And since we and everything else comes from the same star material, this energy is the closest thing there is to “divine.”

Metaphysical Humanistic Science will not teach that you must become one with God, because in essence, you already are God; that is, you are connected to everything else because you are literally made of the same stuff. Unlike most religious dogmas that practice codependence on some mythical, supernatural being in the sky, Metaphysical Humanistic Science teaches healthy self-dependence. It will also not teach you that unhealthy self-sacrifice, privation, and/or self-denigration is somehow preferable to living a full and meaningful life, but it will teach you to do right, which at times might involve a measure of self-sacrifice. However, privation and self-denigration are never healthy. Metaphysical Humanistic Science is about exploring and enhancing the human condition; it’s about empowering the human spirit; and it’s about honoring the divine that exists in all creation.

Metaphysical Humanistic Science takes a meaningful, practical, and rational approach to metaphysics devoid of superstitious, mythical, and ungrounded beliefs that rely on aberrational faith to accept. If God did exist and was a human being, he would be tried for crimes against humanity for all of the atrocities committed by him (and in his name by others) as well as for his lack of “doing right” as discussed in Principle 1. The God featured in the Bible (at least) committed acts that even humans (his supposed creation) find morally reprehensible and would never do. We, in fact, have laws against things like genocide.

All things considered, the traditional god-concept promoted by religions far and wide for millennia was just one ancient attempt to explain the nature of existence (metaphysics), and it all started in the mind of one single human being; someone just like you and me who desired to understand what we all want to understand: the nature of reality. Over time, the concept was embraced and added to by yet others. However, the idea of a supreme being is now an outdated concept as millions of people the world over are abandoning it in favor of a more logical and reasonable view of existence in the light of scientific discovery.

For some of you, my foregoing comments might be rather shocking—even scandalous—when viewed through the lens of a religious upbringing. And while I concede that they were rather direct, I challenge you to remove the religious spectacles and consider the matter in the light of grounded reason. Think for yourself!

Look to Your Higher Self; Your Soul-Light

You have everything you need within you to be successful and to find meaning and purpose in life. I once knew a man from Great Britain who had been rejected by his religion, family, and everyone he knew because he could no longer accept the teachings of the religion with which he had been involved. Now single, he traveled Europe and the U.S. and investigated many teachings looking for that missing part of him. The ironic thing about it is that the “missing part of him” was never missing at all. It was simply not recognized. And the unfortunate thing is that I don’t think he ever found it; he never found himself. This is truly sad; he was looking for himself in all the wrong places.

As we evolve toward self-completeness and enlightenment, we must look to ourselves, more specifically, to our Higher Self for the answers we seek. This does not mean that you cannot ask for advice from trusted friends, mentors, or confidants, it means that you must ultimately seek your own counsel in the light of gained knowledge and experience.

In order to develop a better connection to your Higher Self, you must think of it as a very real part of who you are; a part of your very own consciousness. Visualization can help you do this. Let me share a visualization I use every day to connect with my Higher Self. I call it my Soul-Light Visualization. 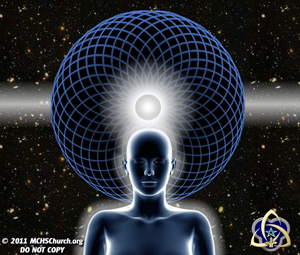 Close your eyes and take a couple of deep breaths, in through your nose, hold them for a moment, then release them slowly through your mouth. Relax. Now visualize a bright sphere, directly above your head, glowing with pure, white energy (some may identify this with the crown chakra). Now imagine that this light—this Soul-Light—is radiating the tentacles of its energy outward in all directions and connecting with the Universal Consciousness. This means it is connected or entangled with all other beings and things in the Universe.

Your Soul-Light contains a limitless abundance of energy that is self-perpetuating. Its energy is pure; it is clean; it is the embodiment of enlightenment and self-completeness. Your Soul-Light has the ability to cleanse, revitalize, and empower your body and mind including your outlook and attitude. It has the ability to heal any anomalies or anxiety in your body or spirit resulting from the stresses of daily living.

Now, you must take in this energy and replenish your spirit by pulling this energy downward so that it fills up your entire body from head to toe. Feel the energy as it nurtures and revitalizes every muscle and every cell. See your body actually filling up from your head downward and glowing with the unlimited power of your Soul-Light; your Higher Self. See this energy continuing past your feet and into the ground thus keeping you grounded and centered.

Perform this visualization every day as part of your meditation routine, perhaps before retiring for the night. Do it whenever you need a lift or as a way of centering yourself. Rather than relying on a mythical god outside of you, seek your own counsel; seek your own validation; seek your own strength. You are enough.

The answers you seek are within. Look there.